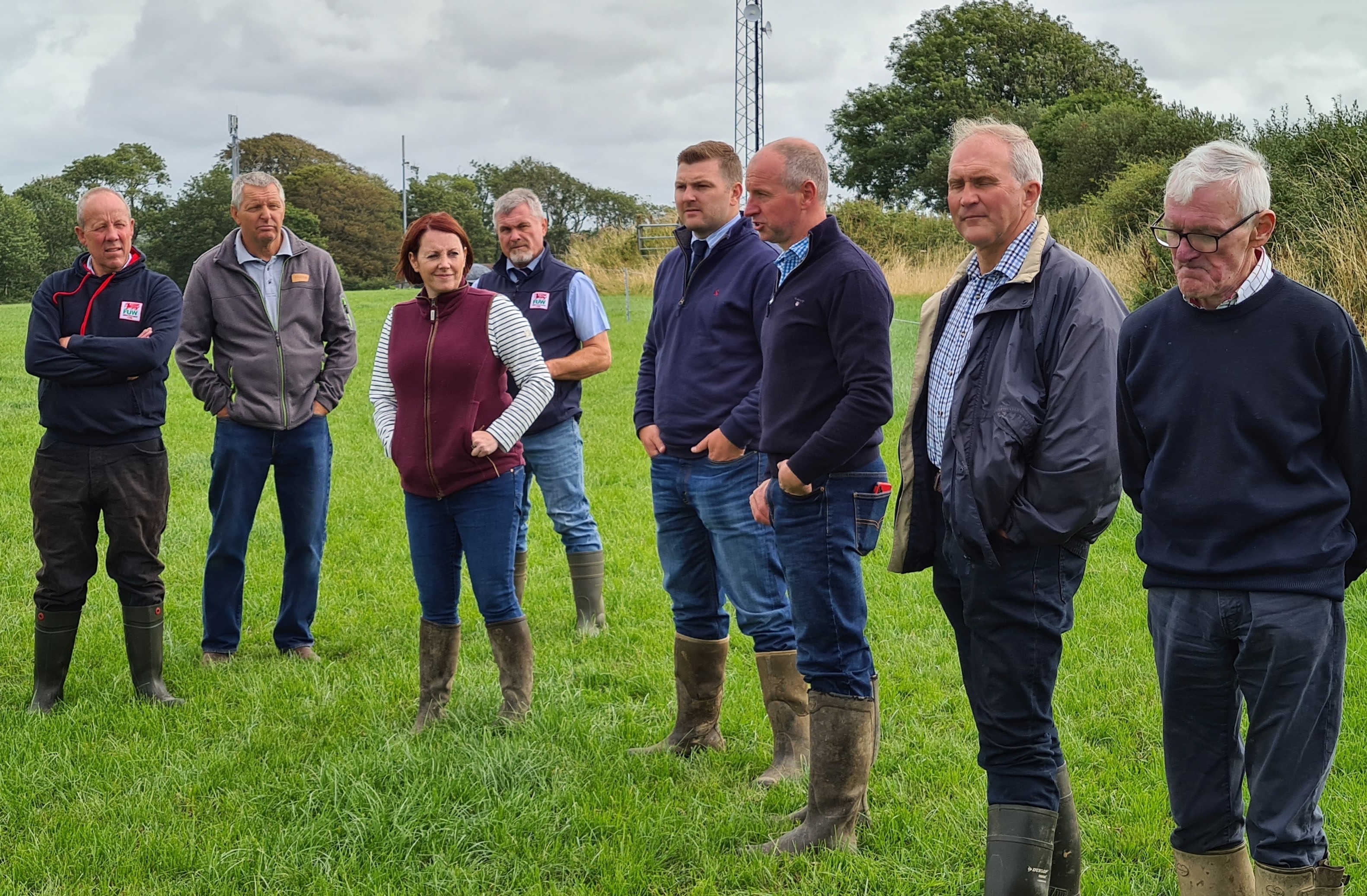 Pembrokeshire beef, arable and sheep farmer Mathew Van Dijk and Farmers’ Union of Wales officials from Carmarthenshire and Pembrokeshire have raised concerns of the farming industry with Member of the Senedd for Carmarthen West and South Pembrokeshire Sam Kurtz.

The meeting was held at Arnolds Hill Farm, Slebech, Haverfordwest, which together with Square Farm next door, is a 300 acre holding which is home to around 150 head of cattle and 50 breeding sheep.Between the two farms, Mathew Van Dijk and his partner Cath Davies keep Limousin and Limousin cross suckler cows. The calves are reared to 20 - 24 months old and they also keep some pedigree breeding bulls.  The couple also grow 32 acres of spring barley, 7 acres of winter barley and 112 acres of maize.

Speaking about delays in the planning system which led to difficulties in being able to plan projects, Mathew said: “We have  submitted a planning application to convert an old building on the farm into a holiday let.  The application was submitted in April in the hope that if it was given the go ahead the work would start at the beginning of September with a view to being able to rent it out from May 2022. However, 16 weeks later we are still awaiting the go ahead.”

It was further highlighted that the planning delays led to knock-on problems with the availability of builders and contractors and also arranging supplies of materials.

With the planning system already struggling, Union officials raised the question of how local authorities will cope with the volume of planning applications which will be submitted by farm businesses needing to comply with the agri pollution regulations, including the amount of time it will take to process them and the subsequent availability of builders to undertake the work, particularly as there are several months of the year when it is impossible to construct new slurry storage due to the weather and ground conditions.

Gerwyn Williams, FUW Pembrokeshire Vice Chairman, said: “The Welsh Government must consider the feasibility of these regulations and how they can realistically be implemented on the ground. If there are delays in getting planning for farm diversification projects and builders in place now, how will that impact planning for say slurry lagoons and yard covers? We do not wish to be in the position where farmers will get penalised for issues outside of their control.”

Discussing the Agricultural Pollution Regulations and the impacts they would have on the industry in Pembrokeshire, Mathew highlighted that as they are a mixed farm, the stock helps to improve the soil structure of the arable fields as part of a rotation.

“The muck from the sheds provides a valuable natural fertiliser for the arable crops. This all plays a part in reducing our carbon footprint and being a sustainable farm enterprise. But the changing regulations may lead to us keeping less cattle and in the worst case scenario getting rid of them all. That would mean that we would have to increase our use of artificial fertiliser which goes against climate change and sustainability principles and I’d prefer not to be forced down that route,” he said.

Future government support for the industry was also discussed and FUW Deputy President Ian Rickman said: “When it comes to a future agricultural policy for Wales a one size fits all approach is not going to work. In addition, a scheme which focuses only on the provision of Public Goods and environmental outcomes would fail to take proper account of prosperity, jobs, language, culture and other issues inherent to the goals of the Wellbeing of Future Generations (Wales) Act 2015, and other Welsh objectives, missing the opportunity to deliver a holistic and truly Welsh policy.”

Mr Kurtz also heard about the on-going problem of bovine TB and the never ending numbers of cattle being removed from farms in West Wales, with no significant degree of improvement in the situation being seen.

FUW Pembrokeshire county executive officer Rebecca Voyle said: “In the past two decades the Welsh Government has quadrupled the number of cattle herds tested annually for the disease, introduced pre and post cattle movement TB testing and split Wales into seven zones - each with different and often complex rules and policies - as well as introducing innumerable other policies, in an attempt to eradicate bovine TB.

“Despite this, the number of cattle slaughtered due to TB has risen almost eight-fold since the year 2000, and so far this century more than 160,000 Welsh cattle have been slaughtered due to the disease. Ignoring the scientific evidence and blaming farmers in order to cover up decades of flawed policies that have led to the slaughter of hundreds of thousands of cattle and widespread ecological damage does not help. It’s time for the Welsh Government to address the issue in such a way that sees results on the ground.”

Concluding the visit, FUW Deputy President Ian Rickman said: “I thank Sam Kurtz for joining us here on the farm and Mathew for hosting this meeting. It is clear that there are many issues affecting our industry and that more often than not, the power to address these lies with the Welsh Government. Our farmers, like Mathew, are willing to work in collaboration with the Government but it has to be that, a collaboration that takes on board and addresses the needs of our industry.”

We hope everyone had a fantastic day at the #WinterFair yesterday! We’re certainly looking forward to Day 2 of this… https://t.co/5PuC7QLZPk
Follow FUW_UAC on Twitter