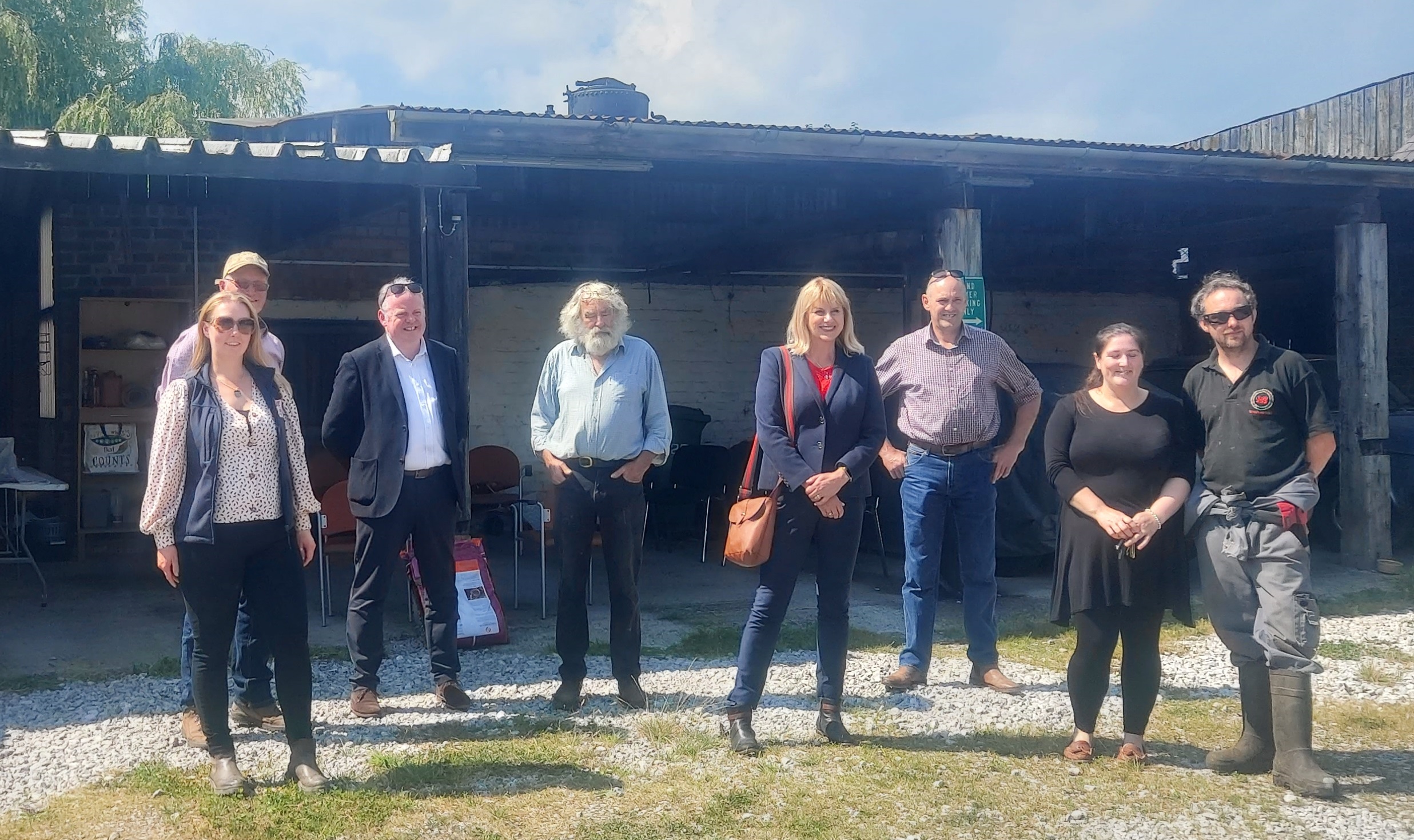 A Flintshire organic dairy farmer has raised industry concerns around bovine TB and the Water Resource regulations with regional North West Member of the Senedd Carolyn Thomas, when the family welcomed her to the family farm.

John and Jenny Wrench, who are the third generation on the tenanted holding, farm in partnership with John’s parents Stephen and Anne, as well as grandparents John and Vera, at Beeches Farm, Saltney Ferry in Flintshire.

The 186 hectare holding was once a beef, sheep and arable farm. However, as corn prices didn’t change over 20 years whilst machinery costs trebled, the margins on beef became tighter and livestock worrying increased, the family decided to start dairy farming. They now have 130 dairy cows and hope to increase this to 250 milking cows. The family also keep 100 young stock.

The decision to convert the holding to dairy in 2020 was not an easy one to make and put enormous financial pressure on the family. To future proof the farm business, the Wrench family have invested heavily in winter housing and feeding infrastructure for their dairy cows. Whilst the landlord has been supportive, they have made all the investments themselves.

The investment paid for a state of the art cattle shed with excellent ventilation, including a feed passage within the shed to improve biosecurity and reduce the likelihood of badger to cow contact. The family further decided to convert to organic, as John and Jenny are passionate about improving the environment on their holding and the welfare of their cattle. Despite there being no payments currently for Glastir organic conversion or management, 200 acres have already been fully converted, and they are aiming to convert all the land in the future.

Looking forward, John and the family have also taken steps to future proof the business for the Water Resources Regulations by ensuring the sheds are compliant with the new rules and have added an above ground slurry lagoon with 5 months worth of storage capacity, as well as a water separation system for slurry. The work was partially financed through the Welsh Government’s Sustainable Production Grant, which focussed on farm waste management of slurry systems.

Whilst the family is optimistic about the future in general, there are some concerns. Speaking to the regional Member of the Senedd Carolyn Thomas, John Wrench said: “We are really concerned about the effects the current Water Resource regulations will have on us. The closed period for example does not make sense here. If we have to wait 5 months  and empty the lagoon on a wet spring day, as opposed to on drier winter days, it would be a far bigger environmental problem, especially being situated on a flood plain. Working on a calendar year basis as opposed to the season, soil conditions and the weather does not work.

“Also, this land was previously a military base and we have numerous tracks and hard standing going through the farm. If the regulations carry on in their current guise, we will not be able to store silage on these hard standings and would have to store silage bales directly on the soil, consequently creating poaching when accessing them in the winter.”

Walking around the farm, Stephen Wrench explained that they used to have plenty of lapwings nesting on their land, which have now decreased due to an increase in badger numbers in their area. “We would walk the fields and mark out where the eggs were so that any cultivation or harvesting wouldn’t impact on them. Grassland management was also important for creating the right habitat. Sadly badger numbers have increased and many of the ground nesting bird eggs were eaten. The Welsh Government really needs to address this problem and not just focus on one element of disease control and draconian cattle measures,” said Stephen Wrench.

Speaking after the visit, FUW Denbigh and Flint County Executive Officer Mari Dafydd Jones said: “John and Jenny are an excellent example of how agriculture not just supports but is intertwined with the rural economy. Once the business is established they hope to employ extra staff. However, they face some serious challenges and some of those could be helped by the right policies coming from Cardiff.

“We had very constructive discussions with Carolyn Thomas here and we hope that our key concerns around the Water Resource regulations and bovine TB will be taken on board.”