Food production and looking after the environment goes hand in hand at Pennant farm
The Roberts family, who have farmed at Pennant Farm, Llanymawddwy for several generations, keep beef and sheep, mainly hill ewes and some crossbreeds. A small suckler herd and crossbred ewes are also kept on the lowland and the family have diversified into holiday lets as well. There is a strong sense of responsibility when it comes to looking after the environment and creating biodiverse habitats, as well as producing food.

Taking their environmental ambitions forward, Lisa and Sion Roberts, set in motion restoration works to re-profile and block the extensive complexes of hags and gullies across the Bwlch y Groes site, which were carried out by experienced peatland contractors at the end of the 2020 and start of 2021.

It is estimated that over the next 35 years, the restoration of the site will halt the loss of 2,335 tonnes of carbon emissions equivalent, which roughly equates to the amount of carbon dioxide generated from burning 632* household tanks worth of oil. The emissions from degraded peatlands in the UK currently account for 4% of total national emissions, making peatland restoration of critical importance for national climate targets.

Running along the eastern edge of Snowdonia National Park, the project area sits within the Berwyn and South Clwyd Mountains, which, at 2,209 ha, is one of the largest areas of upland heath in Europe. The Bwlch y Groes peatland restoration site is a blanket bog situated on a large saddle (bwlch) west of Llyn Efyrnwy nestled between the Aran Fawddwy and the Berwyn mountain ranges in south Snowdonia.
The area supports the most extensive tract of near-natural blanket bog in Wales and is the most important upland in Wales for breeding birds, supporting a wide range of internationally important species.

The project site lies within a number of designated SAC, SPA and SSSI areas. As well as halting the loss of carbon from the site and protecting the significant store of carbon in the peatland, it is anticipated the restoration works will have wide spread co-benefits as such improved water quality, steadier water flow, increased biodiversity, and improved habitat conditions for freshwater invertebrates.
“Livestock farming and looking after the environment go hand in hand here. We’ve had sheep and cattle here on the mountain. They are a vital part of keeping the biodiversity flourishing here on the hill. I don’t want to think about what it would look like if they weren’t here.”
Lisa Roberts 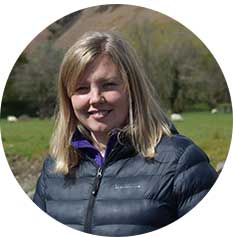