Cae Coch farm, Rhydymain, is the home of well-known TV presenter and farming champion Alun Edwards. The farm, situated on the Aran Fawddwy ridge, includes 735 acres out of which 480 acres are not accessible by tractor. It’s a mountain farm, going up to almost 3000 feet.

Driving up a short farm track, it is impossible not to notice how green it is here. The eye is drawn up to the surrounding hills, the trees envelope the interspersed small fields, none of which are bigger than 5 acres. Some are scattered with a modicum of animals - Welsh Black cattle and their calves are resting, chewing the cud; a few sheep are visible on the mountain ridges.

There are hay fields with flowers in them, buttercups and daisies. The land is not pushed here and there are docks, thistles and dandelions. The fields have hedges and stone walls as borders, and have been here since the middle ages. Moving up through the land, it’s sloping and north facing, shrub land or ffridd land as it's called here is followed by unimproved land that includes gorse. There is purple heather on a crested flat and then you get to the white mountain - where you find sedge grasses and the sheep graze in the summer. Wherever you look it feels like a combination of wild and managed land.

Alun has planted 20 thousand hedging trees on the lower lands, the 6 acres of woodland on sloping land, which is not suitable for livestock grazing, was fenced out and 300 oak trees were planted, improvement works on the river that’s running through the farm has been started, and it is clear that the environmental work here is carried out with passion and enthusiasm, from dry stone walling, planting trees, and hedge laying. Alun also joined a flood prevention scheme with the Snowdonia National Park and as well as adding solar panels on the cattle sheds, he has started to keep bees.

Farmers like Alun understand the need to look after the environment and the role food production plays in maintaining biodiversity and habitats, but also the role farmers play in the wider rural economy, culture and society.

“It’s not just about cattle and sheep here by any means. The environment and our management of it has now become just as central to our existence and our aims.”
Alun Edwards
“We take every opportunity we can to enhance biodiversity, while still maintaining our primary role of producing food. People like Welsh lamb and beef.”
Alun Edwards
“In planting all those trees here on the farm, we’ve created flowers all year round and that’s really good for our pollinators. Willow hedges in the boggy areas, then the Hazel will flower, we’ve got Blackthorn flowering when nothing else is in flower and gorse, and then we get the Hawthorn, which has been tremendous this year. We’re building up a portfolio of what we as farmers always did but maybe we weren't aware of how beneficial it was.”
Alun Edwards:
“I find that probably, if we look at the figures that are coming out in terms of emissions the whole picture isn’t considered and they’re only looking at the negatives rather than balancing it against the positives.”
Alun Edwards 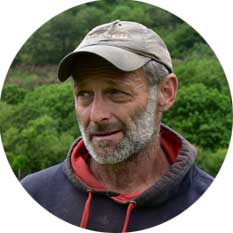