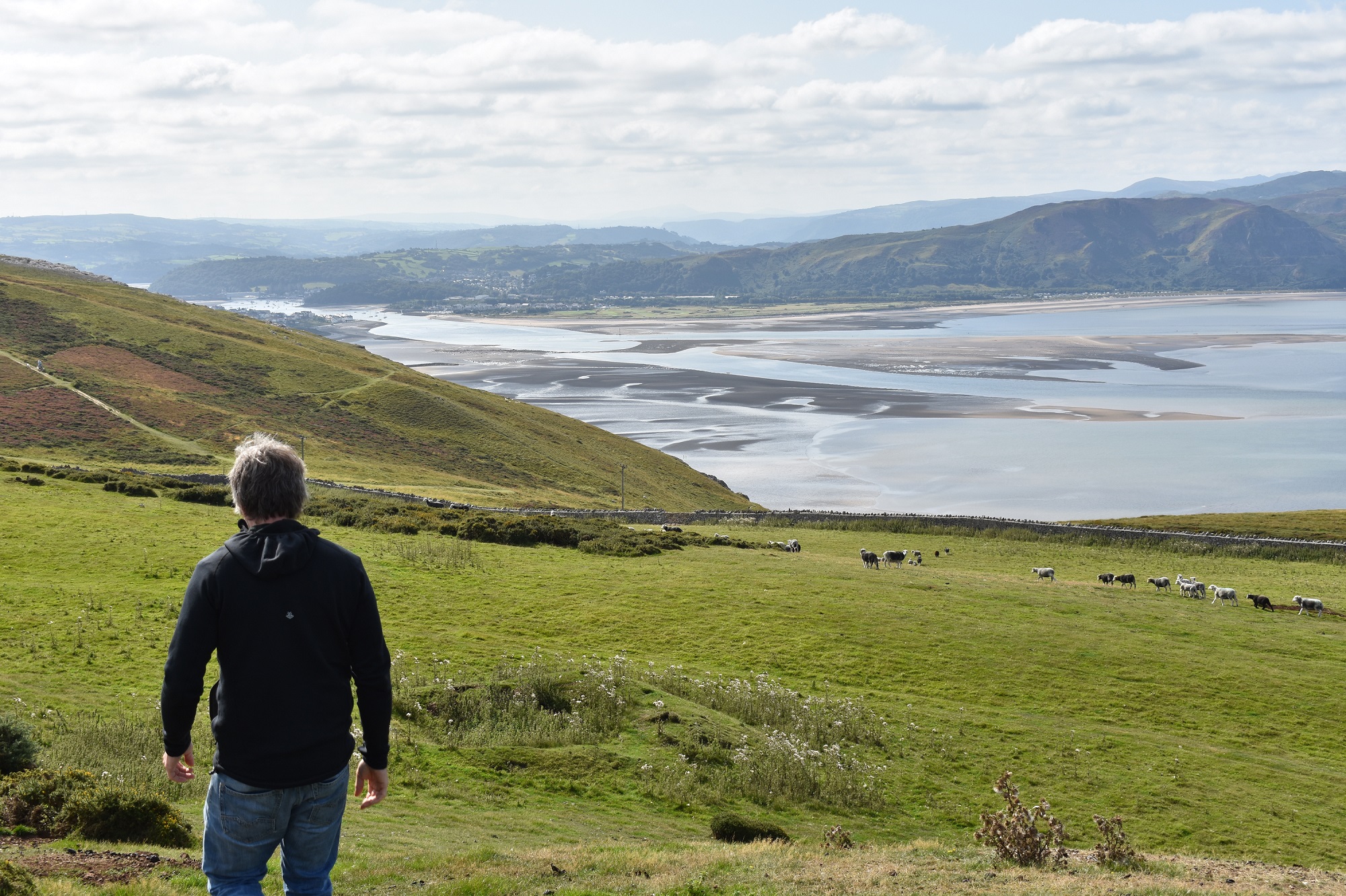 The Great Orme - a limestone mountain that rises 207 meters above sea level and is recognised as a Country park, Special area of conservation, a site of special scientific interest and part of the heritage coast. With views right across the Irish Sea and Anglesey in the short distance, it is no wonder that it’s rugged landscape attracts over 600,000 visitors a year.

But the Great Orme is more than just a tourist attraction. It is home to National Trust tenant Shepherd Dan Jones and 650 sheep. Dan has been the custodian of Parc Farm for the past 5 years and looks after not just the 145 acres included with the farm, but helps to manage a total of 900 acres, which have grazing rights for 416 ewes plus followers.

Dan was born on a small family farm on Anglesey, and farming was always his passion. “My parents wanted me to do something different but I really wanted to farm. I went to Llysfasi college and then to Aberystwyth University to study agriculture. I always wanted to be my own boss and loved working with animals, so this was a really natural progression.”

The National Trust bought Parc farm in 2015, and it was an important purchase as there were plans to convert the 150 acres farm into a golf course and with that the sheep would have had to go. The sheep are essential residents on the Great Orme, ensuring grazing rights are maintained and the landscape and biodiversity flourish.

A traditional upland sheep farmer, Dan farms in a nature first way. Food production is done in a sustainable, natural way here. It is non intensive, and goes hand in hand with looking after the environment. “This way of farming has been a natural way of farming in Wales for generations. Some might consider it a bit old fashioned. But it’s the traditional Welsh upland way. That means we work with nature and with the seasons and not against them. We don’t use any inorganic fertilizer and supplement the sheep as little as possible so they can use their natural environment to produce food,” explains Dan.

Since the foot and mouth crisis sheep numbers decreased on the Great Orme, a situation that’s replicated all over the uplands of Wales, bringing with it a myriad of challenges. The drop in sheep numbers here had a detrimental effect on this historic landscape and saw rank vegetation, tall, tussocky grassland that is dominated by coarse species of grass, take over. “Long rank grass smothers smaller herbs for example and it was affecting other important plant species such as the cotoneaster and spike speedwell we have here. It was having a knock-on effect on all biodiversity and nature and that’s why the sheep were brought in by the National Trust to graze the land in a traditional way,” said Dan.

“Because we are on limestone, we get some interesting plants here that live nowhere else on earth. There is one plant here which is very important in terms of conservation and that's the Great Orme Berry, a native cotoneaster. It is one of our rarest wild plants, and only six original wild bushes of this indigenous cotoneaster are known in the world. All six wild bushes grow here. We’ve got other important plants such as the spike speedwell (veronica spicata) too and we need to look after those plants,” he adds.

When the National Trust bought the farm it was surveyed and the biodiversity was measured. The farm is now monitored every couple of years and shepherd Dan is pleased with this year’s results. “A survey was done in June this year and the numbers are looking really good. Wildflowers and the number of invertebrates have increased. It’s going in the right direction and we’ve achieved quite a lot in just 5 years,” he said. 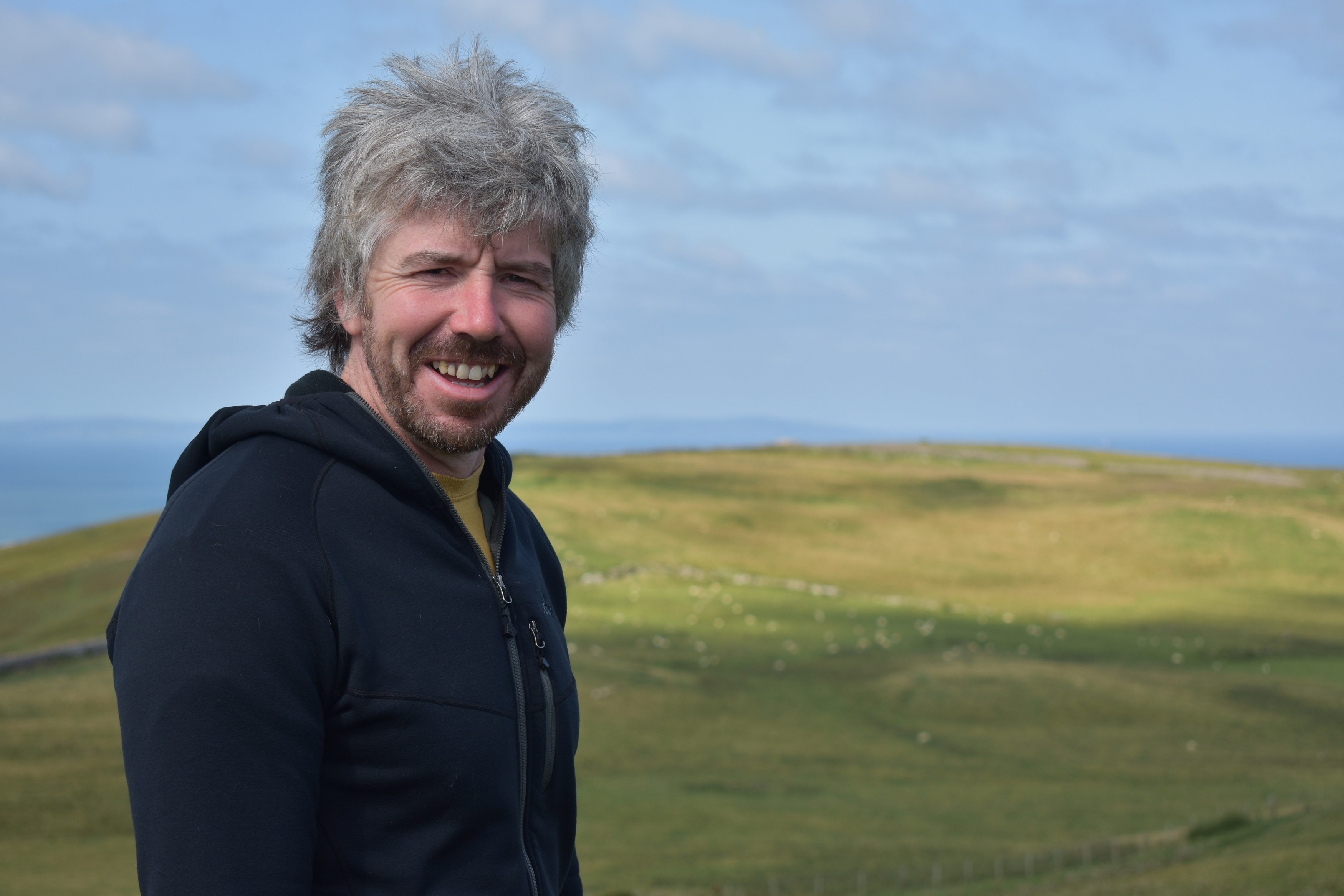 As the Great Orme is recognised as a country park, a SSSI and an IPA (Important Plant Area) it is managed by the local council and Natural Resources Wales, whom Dan works with closely. He also works with the National Trust and Plantlife Cymru who have bought the hefted sheep flock for the farm. “Plantlife Cymru wanted to get grazing right and secure the future grazing on the Orme for the hefted flock. If I left and a new farmer came, that hefted sheep flock would stay, securing the grazing for future generations,” said Dan.

The land here would not flourish or support the variety of species that it does if it weren't for custodians of the land like Dan Jones. Working with the RSPB and implementing specific grazing strategies has seen a welcome increase in certain species. “It’s an amazing place for birds and the RSPB are very involved. I agreed to graze 2 of the fields on the farm quite heavily all year round to provide the ideal foraging ground for the choughs. When I first came here we had 6 breeding pairs but on the last survey we had 7 breeding pairs. It doesn’t sound like much but it is a great achievement,” he said.

Part of the Great Orme is also owned by the North Wales Wildlife Trust and Dan works closely with them too to graze their sites. NRW also has a nature reserve here which has the cotoneaster on it. These sections of the land require a different grazing approach, Dan explains. “I graze these land parcels at different times of the year so the grasses are down and then I take the sheep away, so that special plant species such as the Great Orme Berry (cotoneaster) can flourish. One of the big challenges here is speaking to those big organisations and making sure everyone is in agreement. So far it’s working well though.”

When it comes to sustainable food production, whilst caring for the environment, farmers like Dan Jones are leading the way. “There is a massive difference as to how I produce meat and the big feedlots across the world. It’s frustrating when we get tarred with the same brush. Climate change is here and we need to do something about it. But Welsh farming needs to stand up for itself and showcase all the good things we’re doing. We’re not trying to kill the world, we’re producing food whilst helping the planet, nature and wildlife and making the area beautiful for everyone,” he said.

The sheep on the hills play an essential part here, in terms of food security and conservation. “We need to keep the sheep on the hills to keep important plants flourishing. However, we do need to be aware of overgrazing which has happened in the past. There has to be balance. Everything in life is about balance and that’s what I try to do here.

“We will have to plant more trees but it’s important that it’s the right tree in the right areas. Some of the intensive lowland farms are probably, in terms of wildlife and nature, not as varied but that’s the land which produces the most food. A decision must be made between having food and nature and conservation and balance it out. We do as much as we can really. Taking farming away and letting everything grow wild doesn’t work. We need to manage our landscape and control the grazing, whilst feeding an ever growing population.”

When it comes to people’s diets and food, Dan is a firm believer in personal choice, as long as it is well informed and not led by misguided information and questionable data. “The diet people have is their own choice and if they want to be vegan that’s fine. But education is key. We need to show people where their food comes from, and there is a difference between production systems. Having a balanced diet is really important for your health and also for our planet.”

Dan speaks from experience and found out how important a balanced diet is when he took part in an ultra endurance bicycle race completing 1200 miles in the summer. “We need good quality protein and there are only so many lentils you can eat to sustain yourself and get the right amount of protein on board. Meat and dairy are a crucial part of the diet if you want to avoid chemically produced alternatives. We have a choice when it comes to what we eat and should consider where and how that food is produced and how sustainable that is.”

The conversation around sustainability is gaining momentum with COP26 approaching fast. For Dan, sustainable food production means a food system that can be carried on forever in a yearly cycle without harming the environment. “Sustainable means it doesn’t have a detrimental effect on the environment and that’s what we prove here every day, every year. But we have to educate our consumers about how we produce the food,” he said.

Attracting over 600,000 visitors a year, The Great Orme and Parc Farm, are the second most visited natural attraction in the country, second only to Yr Wyddfa (Snowdon). That gives shepherd Dan a great opportunity to educate people from different backgrounds and show them how things are done here. “Part of my role here is public engagement, and I try to get this message out to the general public. I also take groups in to show them how we farm. I’m often surprised about how little people know about food production. When people go to buy chicken from their supermarket in a plastic wrapper they spare no thought where it has come from. These are the people we need to reach. I also get school groups here and I really enjoy explaining food production and conversation to the children,” he said.

When it comes to educating people, the power of social media can’t be ignored and it provides Dan with another tool to help spread the positive story of livestock farming in Wales. “Social media is so influential and often I see false information that’s aimed at making money for big corporations for questionable reasons, based on spurious facts. And that’s why I’m on Twitter - to stand up for farming and explain how we sustainably produce food here. These days, if you like it or not, people will look at where they’re going on social media first. So for me it’s important to share these images of the Great Orme and how I farm because that’s where our visitors' experience starts. They know why the sheep are here before they come and they understand our story.”

In the future Dan hopes to set up his own catering business on the farm, selling lamb and wool products, as well as locally produced honey. “I have some beehives, which I keep to help with pollination, and I hope to sell some honey soon. At the moment there is only enough honey for home consumption but it’s great. This time of year it’s mainly heather honey because that’s what’s flowering right now. I hope to get a few more bees soon. I have had them for 4 years now and it’s quite enjoyable. What they do is amazing. They are hard work and time consuming but I would encourage anyone to have a few hives on the land for the sake of our environment.”

The contribution of UK livestock to GHG emissions is similar to the percentage of GHG emissions from food waste fro… https://t.co/S8MQdicAIU
Follow FUW_UAC on Twitter