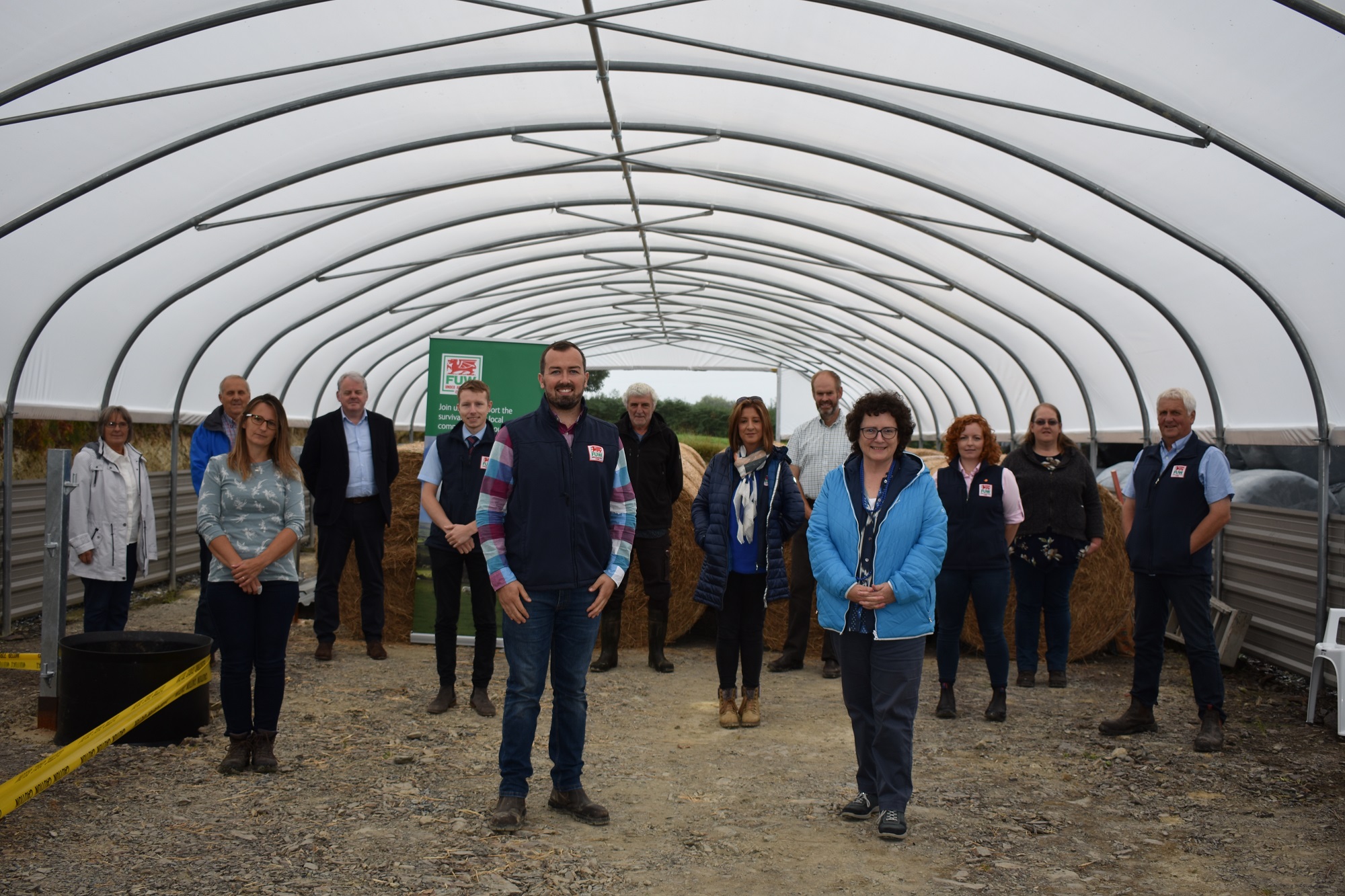 Farmers from Ceredigion have raised their concerns around bovine TB and current tree planting targets with local Member of the Senedd, Elin Jones. Hosting the meeting was Farmers’ Union of Wales Ceredigion County Chairman Morys Ioan, who farms with his wife Helen, at Fferm Drefach, Cross Inn, Llandysul.

The farm has been in the family for over 150 years and Morys is the 5th generation to farm Drefach. Morys and Helen own 24 acres and rent a further 244 acres. They keep 200 sheep and also rear 450 beef calves from dairy herds as stores and finishing cattle.

Morys has recently come home to run the family farm and a lot of improvements have been made to the land including the planting of 4,000 hedging plants through the Glastir Small Grants scheme. Work has also begun on an approved calf rearing unit on which the farm business will be focusing on for the next 5 years. Working with local dairy farms, Morys is currently working on a way to accommodate the bovine TB situation as part of the business.

Speaking to Elin Jones MS, Morys Ioan explains: “We’ve applied for a TB isolation unit, given that the TB situation isn’t improving. Our plan is to get the unit up and running in the next month and then we will be able to buy calves from TB restricted holdings, which after 2 clear tests in the unit will be officially TB free. Then we can treat them as normal and rear them and finish. It’s disappointing that that’s the case but that's where we are and how we’re having to move the business forward.”

Members discussed the option of badger cull licenses for farmers as a solution to the problem but highlighted that if farmers were to apply for such a license there would be a backlash from animal rights groups and many members of the public. What was needed, Morys argued, was better funding for the science to help combat bovine TB.

“The whole situation is very upsetting and disappointing. The science to combat bovine TB needs far more investment. Money talks. Covid has shown us that. If you throw enough money at something, you get results very fast,” added Morys Ioan. 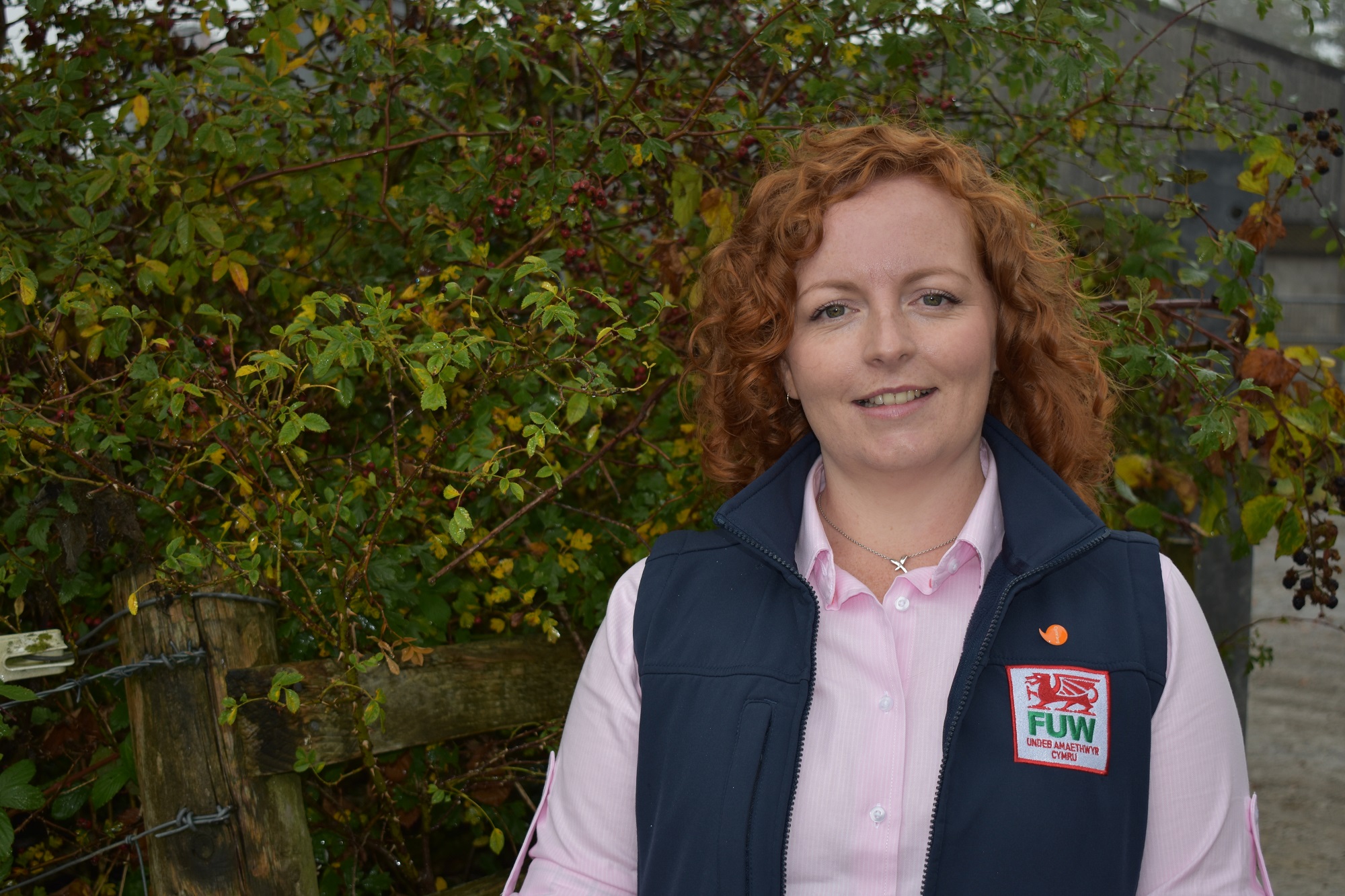 FUW Policy Officer Elin Jenkins added: “The refusal to implement a badger cull in Wales is having adverse effects on the industry and the bovine TB situation. Even though the option is there to apply for an individual cull license, farmers have not taken up the option because of fear of persecution by animal rights groups.”

The science behind tackling bovine TB must therefore be improved and accelerated, added Mrs Jenkins, and the cost effectiveness of the current testing regime must be questioned. “It is clearly not delivering the results we need. Only testing the cattle and not the badger population is an inadequate way of dealing with the situation. It’s sad to see that farmers like Morys are having to set up a bovine TB isolation unit before they go down with TB, knowing that it is only a matter of when and not if,” said Mrs Jenkins.

Turning the conversation to environmental matters, Morys explained that the family have planted 4,000 hedging plants through the Glastir small grants scheme and a neighbouring patch of land they purchased has since benefitted from the extra hedgerows which benefit the stock and also store carbon.

Morys and Helen pride themselves on their carbon negative status. He said: “We calculate our carbon footprint here on the farm through Farming Connect discussion groups and we are actually carbon negative. We will keep it that way for as long as we can. That’s our long term aim, to stay carbon negative and we will work constructively with any partners that want farming to work with, rather than against, the environment.”

To achieve their carbon negative status, the family have reduced the use of machines and the amount of bought in animal feeds. They are making the best use of what they grow on the farm. 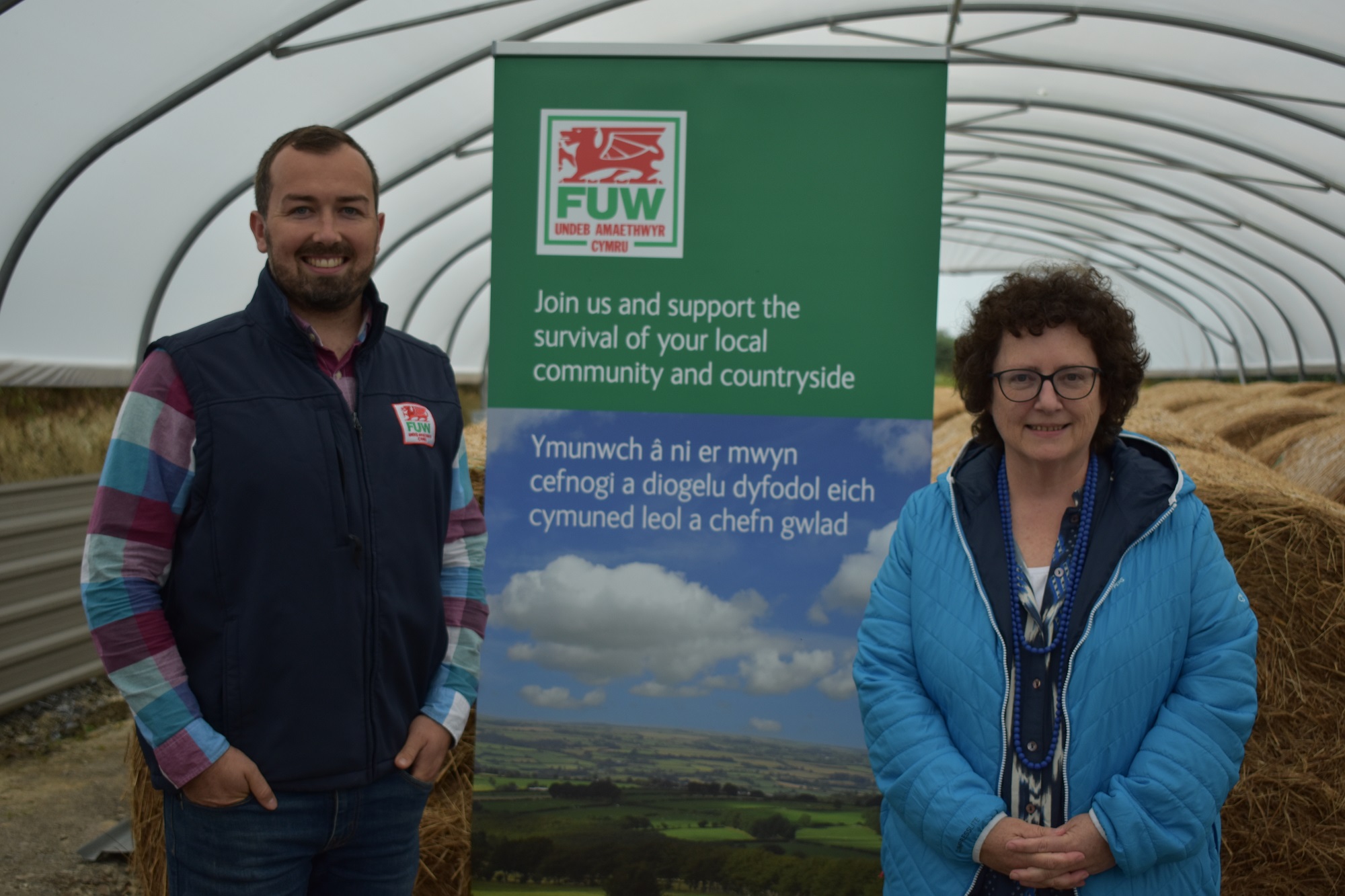 “We grow grass very well. The science behind how much carbon you can build in the soil by good grassland management is what we’re incorporating and it’s going really well. We buy calves locally and rear them and finish them on grass. That way you have a locally sourced, grass reared, carbon negative beef source. That’s good for the environment and good for people,” added Morys Ioan.

The family takes their responsibility for the environment seriously, but Morys is concerned about some of the tree planting targets.

“Planting trees is a good thing but where you plant them and who plants them is also important. You shouldn’t plant them on productive food producing land. There are marginal lands on every farm that would benefit from tree planting. The big issue is that external companies and big companies from within Wales are buying up land and family farms and then blanket planting them with trees. From the business side, these companies are not reducing their emissions and are just using this to lazily offset their carbon footprint,” he said.

Such actions also negatively impact society, Morys Ioan added, as it displaces communities, the Welsh language and people who have been living here for generations. “We won’t have any rural communities left if this carries on unchallenged,” he added. 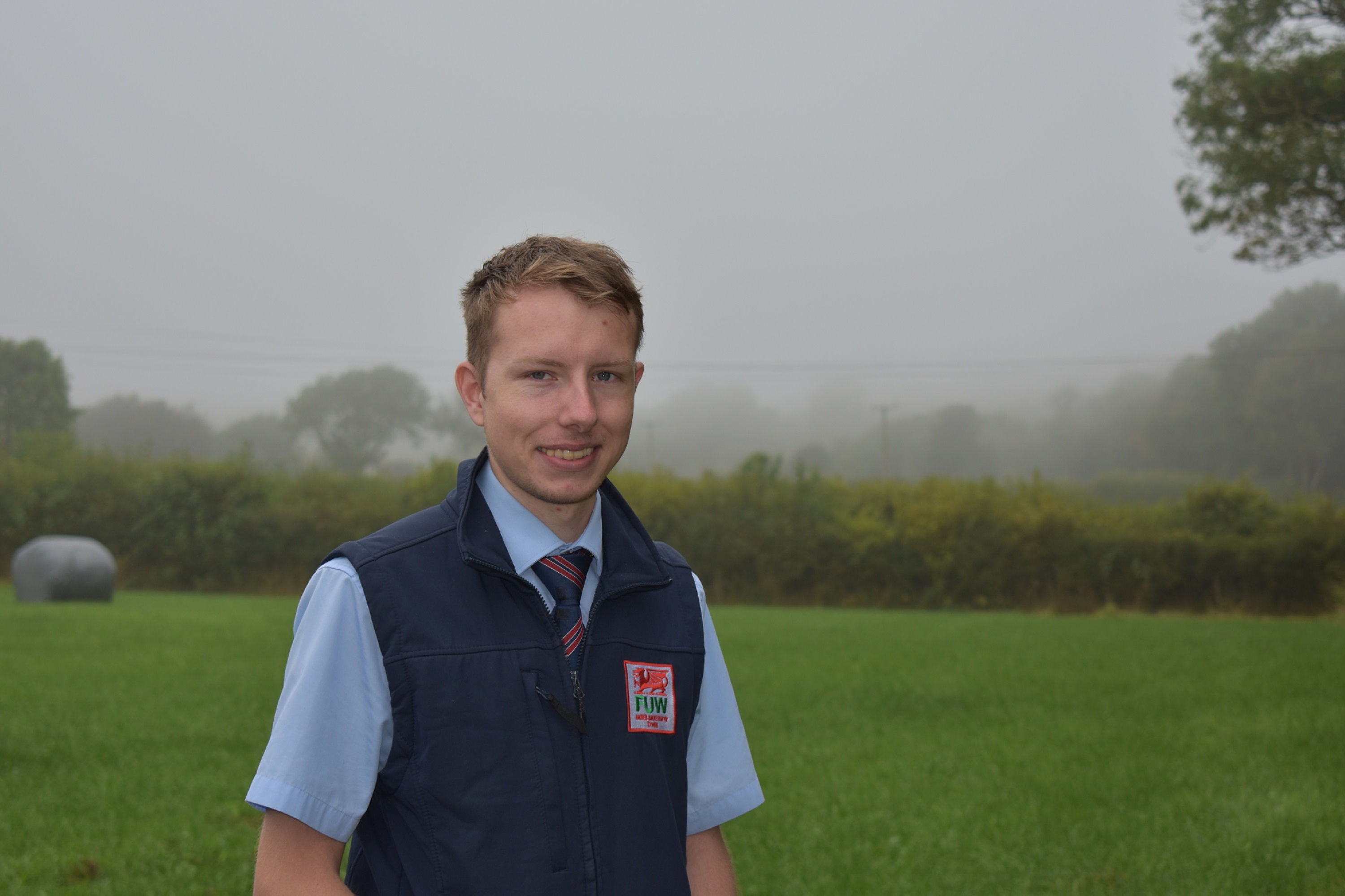 FUW Senior Policy and Communications Officer Gareth Parry said: “The issue of businesses from outside of Wales coming in and buying up farms and land is a major problem. The concern is that carbon credits are being bought and used to offset the emissions of businesses outside of Wales which then can’t be used to meet Wales’ net zero targets. We want to work with Welsh Government not to object to their tree planting targets but to ensure that the benefits accrue to farmers, communities and Wales as a country rather than large corporations who have no long-term interest in Wales.”

“We want to engage with Welsh Government on this matter before it’s too late,” Mr Parry added.

“This policy will have an effect on everyone across Wales, including farmers like Morys. There are tenant farms to consider as well of course, where landlords are looking to take land back for the purpose of accessing  carbon credit payments which are attractive.

“The real challenge for Welsh Government is not whether they develop a national forest for Wales but how and we call on them to work constructively with us to ensure that we have a policy that works for Welsh agriculture, rural communities and the whole of Wales rather than allow the wholesale conversion of  agricultural land to woodland for the benefit of large corporations who are not even based here in Wales,” he said.

Do you want to be part of the @WelshGovernment's #SustainableFarmingScheme Co-design? Now is your opportunity to… https://t.co/V0V6aY1AHJ
Follow FUW_UAC on Twitter