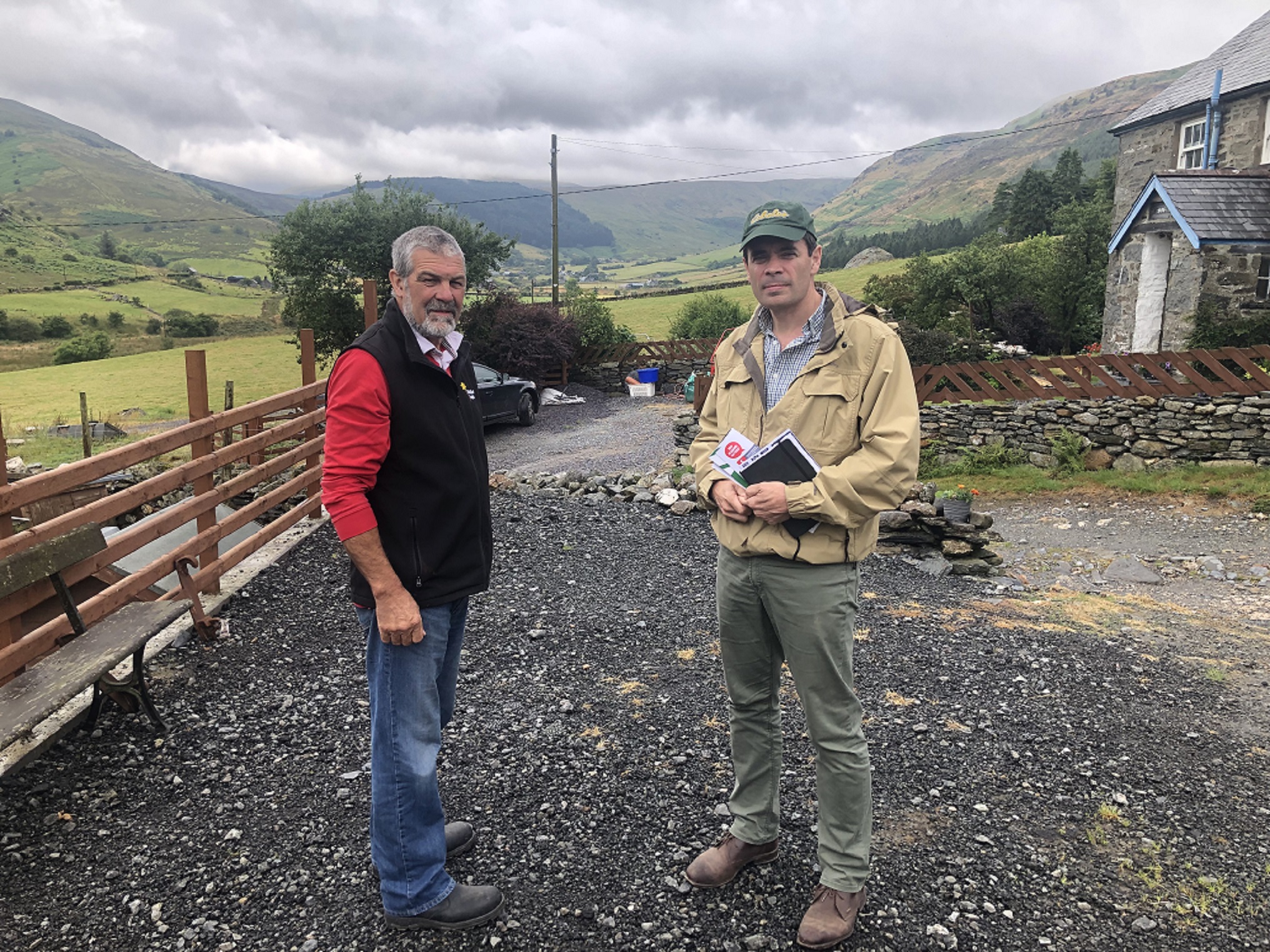 The devastating impacts vast tree plantation plans can have on rural communities and Welsh culture were highlighted in a recent meeting between Farmers’ Union of Wales (FUW) members and Aberconwy MP Robin Millar.

Hosting the meeting at their farm at Llechwedd Hafod in Cwm Penmachno were FUW Caernarfonshire County Executive Committee member Dafydd Gwyndaf and his wife Anwen. Mr Gwyndaf gave a presentation on how the Forestry Commission, as it was previously known, bought many of the farms on one side of the valley and planted trees on the land from the 1940’s to the 1960’s .

“Afforestation has resulted in too many people leaving the area and has resulted in over 30% of the houses in the area being turned into second homes or AirBnB. It is having a detrimental effect on the community, it’s culture and consequently the Welsh language. The depopulation of Cwm Penmachno and Penmachno villages is living proof of the result of large-scale afforestation and we don’t want to see the same happening to other communities,” said Mr Gwyndaf.

To make room for the trees, the farm houses were sold, which resulted in them becoming second homes or holiday homes to many. The population of the area has been decreasing ever since (617 - 2011 Census) which has resulted in the numbers of Welsh speakers in the area lowering to a figure of 55% by the time of the 2011 Census compared to 70% in 1991 and 84% in 1981.

Mr Gwyndaf further told the MP that he remembers being a member of the Urdd in the 1960’s with over 100 other youngsters, and that was just in Cwm Penmachno. Penmachno itself had an Urdd club of its own and the population was strong enough for both villages to have a football team each.

“The promises made by the Forestry Commission at the time included that they would be employing more than the agriculture industry in the area. Today, no more than a handful of forestry workers live in the villages as NRW use large contractors who come from outside the area more often than not,” he added.

The MP further heard that more land will be sold in the very near future at the far end of the valley and there is concern that it will be bought by individuals or institutions only interested in planting trees.

“It’s sure to lead to yet another disaster for the area and resulting in more depopulation, and with that the destruction of our rural communities, culture and way of life. We are supportive of planting trees but our politicians need to be aware of the devastating consequences this will have on their constituents if such plans are not thought through,” said Mr Gwyndaf.

Union officials highlighted that the southern side of the valley was fully planted and many areas still have those trees growing there. This was due to the infrastructure in the area not being good enough to enable Natural Resources Wales to harvest the trees and carry them off to sawmills on the Welsh border.

Other problems such as creating roads through the forests has resulted in rainfall reaching the river Machno much quicker than it was before, resulting in flooding on the lower, more productive farmland.

Other issues raised during the meeting included stone walls being damaged when harvesting trees and no will on behalf of the contractors to repair the damage, resulting in sheep straying into the forests and gatherings taking much longer. Also the management of overgrown bracken and other pernicious weeds such as ragwort is resulting in them encroaching onto farmland around the forest edge.

“The Forestry Commission’s track record and NRW is not very good. Much tighter legislation needs to be prepared in order to ensure that our communities aren’t abused by individuals or institutions that are only interested in short term fixes without any regard to wider repercussions,” added Mr Gwyndaf.

Robin Millar stated: “This is why it’s so important that as many as possible respond to the call for evidence into the new inquiry into ‘The economic and cultural impacts of trade and environmental policy on family farms in Wales’. It was very interesting to hear about the experiences of the FUW members who remember so well how vibrant communities like Cwm Penmachno and Penmachno used to be and the detrimental effect the afforestation of the area has proved to have on the region.”