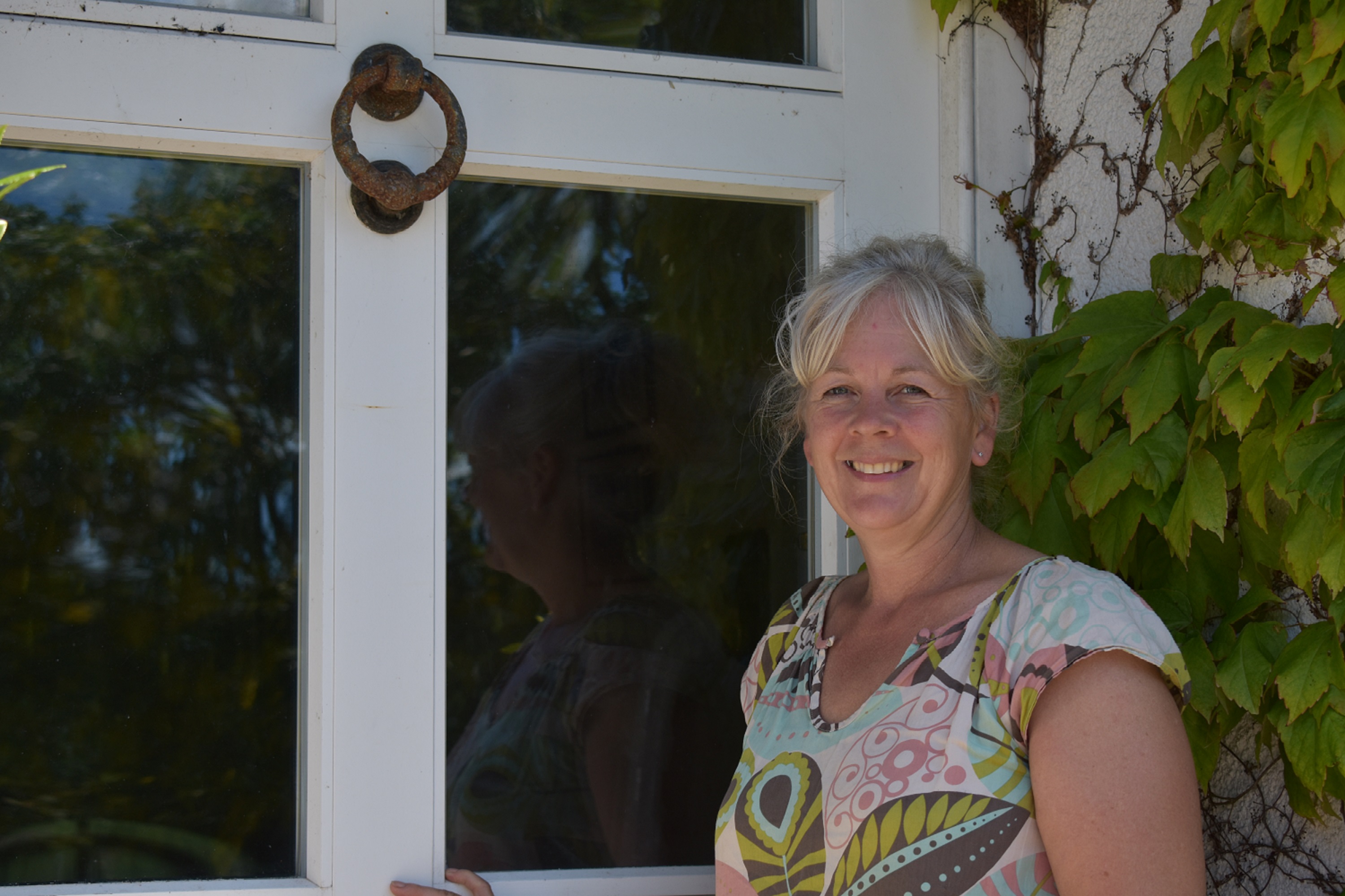 Farming has a key role to play in looking after the environment and combating climate change but the production of food must not be excluded from the conversation, says Pembrokeshire beef, sheep and arable farmer Jayne Richards.

Jayne, who farms with her parents Michael and Margaret and husband Ali at Jordanston Farm, St Mary’s Park, Jordanston, just outside of Milford Haven, Pembrokeshire, has no doubt that if it weren’t for small family farms up and down the country the environment would suffer. The aesthetic look of the Welsh countryside would change dramatically, with rural communities being lost.

However, the family are clear that food production and the care of the environment both have a critical role to play and one can’t function without the other.

The 350 acre farm, which is in the Glastir scheme, is home to 400 breeding ewes and 140 beef cattle, as well as a small suckler herd. The family keep mostly Welsh half bred ewes and breed their own Texel rams and replacement ewes. They also keep some store lambs in the autumn and winter to finish on root crops.

The family grow all their own fodder for the cattle, including silage, haylage, and wheat and barley, and rent out 20 acres for potato production. 50 acres of woodland surround the farm, creating a big wildlife corridor that has been beneficial for wildlife on the farm and also in terms of carbon storage.

Jayne’s grandfather bought the farm in the 1950s and at the time it was a land settlement farm for miners who came down from the valleys. Explaining the history of the farm, Jayne says: “The miners who came here could either work on the farm or they had a house of their own with a greenhouse and kept a pig for themselves. They were fairly self-sufficient then. The farm used to be a horticulture holding and also grew vegetables.

“Jordanston was quite intensive at that time, every inch of the land was in production and the farm had its own pig unit, as well as a horticulture nursery. When my grandfather bought the farm he grew potatoes and kept sheep and beef cattle.” 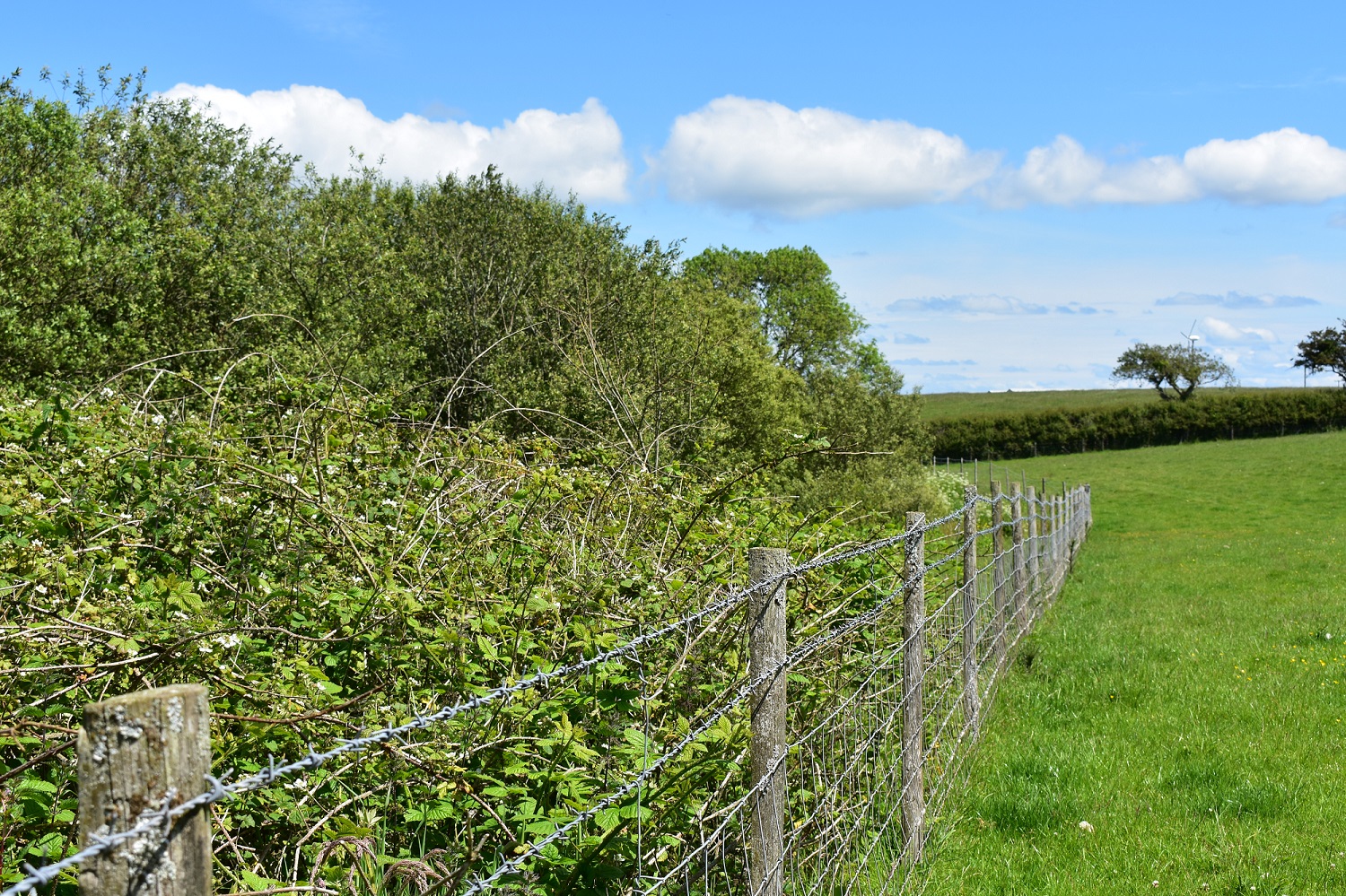 Since then the family has more or less carried on in the same way. Looking after the land and producing food has always gone hand in hand. Jayne, who used to work in the Tir Gofal team, said the environment schemes are of vital importance but food production and the existing farming business has to work alongside the schemes.

“When Tir Gofal first started we did a plan for the farm taking into consideration the wildlife element but also the commercial business aspect. We managed to do quite a few things around the farm that enhanced what’s here and improved things for the future. Amongst many things we have restored hedgerows, we look after 6 irrigation ponds and 3 of them are surrounded by scrubland, a great habitat for wildlife but also a carbon store. These ponds are fenced off as wildlife corridors and they link directly to the woodland. We also leave stubble for over-wintering birds.

“Being a mixed farm is a good thing for wildlife because you don’t have as much monoculture, you can produce sustainable food with habitat left for wildlife in between the cropping, which enhances the movement of species around the farm.

“We rotate the crops every 3 years including swedes, barley, wheat and grass, which is good for the soil.These things have to work together and farms like ours manage it quite well,” she explains.

As part of their environmental work the family have reclaimed the pond at the front of the house and planted 2 miles of native Thorns and hedgerow trees to create a Pembrokeshire hedge. “Our hedges are really well established now and provide excellent habitat for birds. Last year we also included a strip of wildflower meadow and it was lovely to see the poppies, cornflowers, daisies and many other varieties - it did wonders for the birds and insects here on the farm. We try to do lots of small things and as a family we do enjoy the wildlife, but we also have to live and make a profit. It’s about striking a balance,” she said. 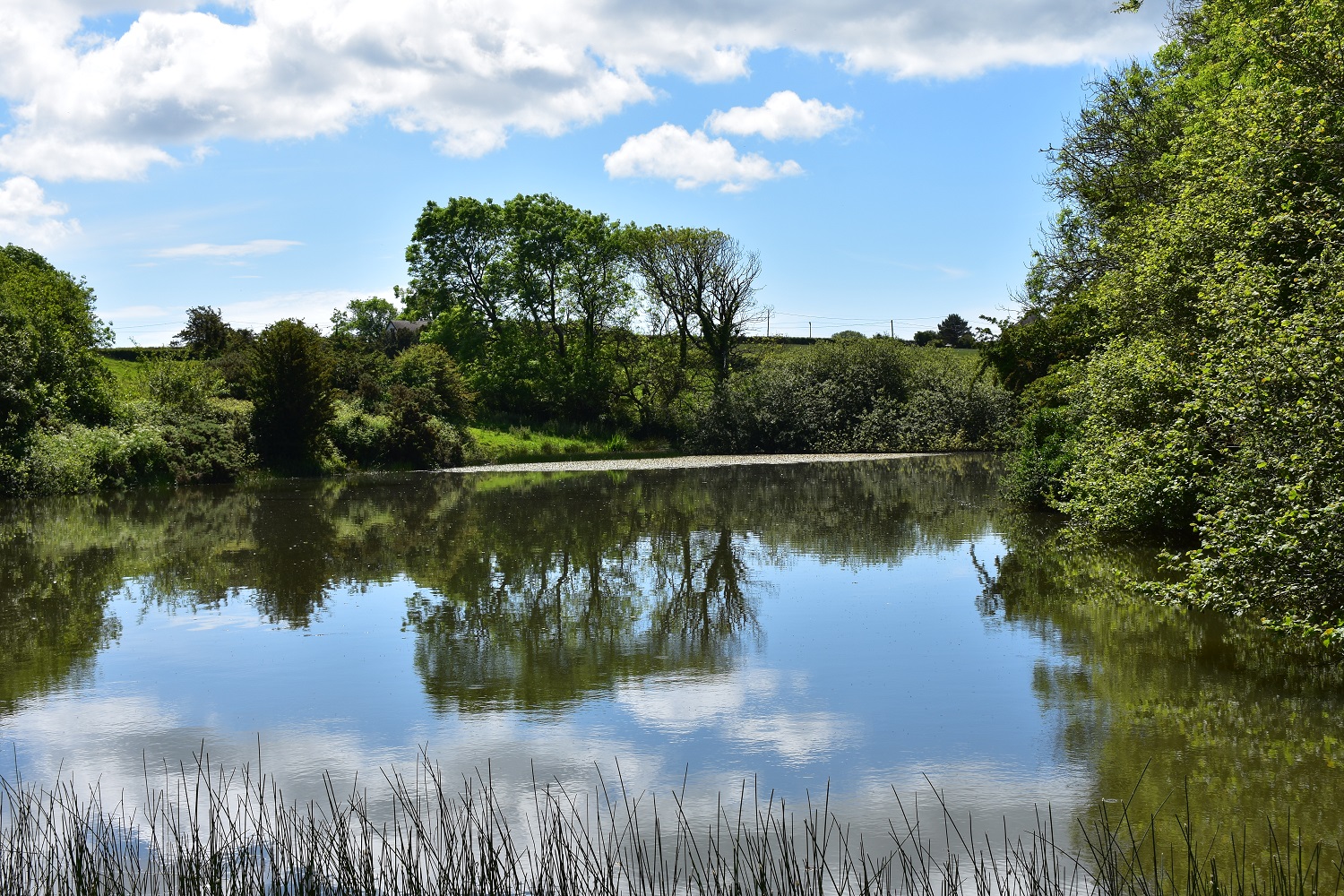 Walking around the farm Jayne explains the history of the irrigation ponds that positively enhance the wildlife and create biodiverse habitats. “The ponds were originally set up to irrigate potatoes which were grown for many years here at Jordanston. They’re scattered all around the farm so we were able to get irrigation pipes to different areas of the farm. One of them is over 50 years old. Over the years the ponds have been really successful from a wildlife point of view as well. Today we have herons, snipe, many different species of duck and moorhens here and it’s nice to see them. The ponds are still used for irrigation purposes.

“We have the streamside corridors now too which protect the habitat and the animals which were drinking from the side no longer erode the banks. We even had an otter on the farm on one of the ponds.”

The land and the farm are of historical importance and preservation of the buildings and way of life is as important to Jayne as the countryside and woodland that surround it. She said: “You can feel the history as you walk around and I’m particularly fond of our woodland, which includes broadleaf trees such as Ash, Sycamore, Beech and Oak.

“There are tawny owls in the woods, and we fenced the wood off to regenerate it all those years ago. It would be good to graze it a little bit though but at the moment under Glastir that’s not really an option. We need to create a few glades in the woodland and grazing would help with that. It would help the invertebrates and birds too. The brambles are getting quite prolific there now and it just shows that a bit of sympathetic land management is needed for the benefit of the environment. If land isn’t managed you end up with too much of the same overgrowth and scrub which does not support such a wide range of species and becomes of little use to anyone or anything.”

Whilst the family are enthusiastic about looking after the wildlife and caring for the environment, they are clear that for one aspect to function properly, the other, food production and the role of the livestock must be appreciated. “The livestock is essential, not just for our income but the way they graze the land helps to ensure that the land and insects here are flourishing too. If the livestock wasn’t here it would all go wild and then you couldn’t use it for anything. People don’t talk about the good things farmers do, only the things they think we don’t do. The livestock is vital in everything that happens here.

“If farms like ours weren’t here, it would not just be the land and wildlife that would suffer. The infrastructure of the countryside depends on agricultural businesses. We feel very connected to the land; it's an extension of our home and we care what happens to it. They are our fields and our responsibility and we take that seriously,” said Jayne. 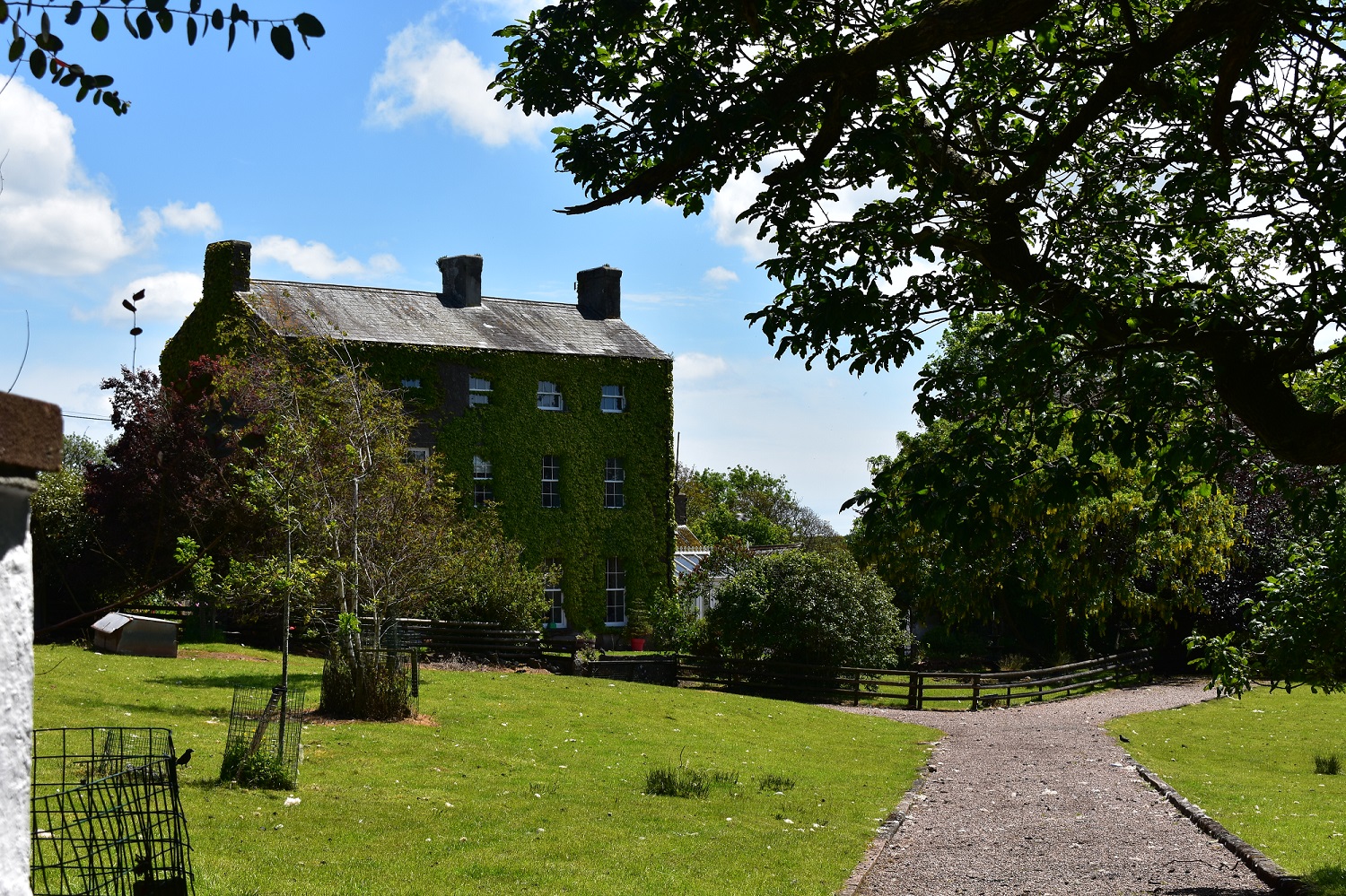 Many of the elements from Tir Gofal were carried over into the Glastir scheme here and Jayne feels strongly that it’s important to be in an agri-environment scheme, not only from an environmental point of view but from a business point of view as well.

“It reflects on how you farm and your customers want to see that you’re environmentally aware. A lot of farmers do environmental work, as part of the jobs to do on a farm list, without properly realising that what they are doing is a form of conservation but it doesn’t always have a name.

“Farming here in Wales is so different to other parts of the world. You cannot class all farms in the same way. The type of farming changes according to geographic location, the climate and soil type, one system will not fit all. You cannot combine everything in a global summary.

“I feel quite angry when the industry here in Wales gets accused and portrayed as being bad for the environment and making climate change worse. Farming is not an easy job, many farmers do improve things for wildlife and encourage the environment to flourish. Sadly that aspect isn’t talked about, it's always the negative side we hear about.

“There are some issues of course, but that’s equally true for other industries. Most farmers are trying their best to address these environmental issues, but there are ways and means to implement change. It should not be at the cost of the farming businesses and rural communities. After all these are the people with the countryside knowledge and skills who have the ability to successfully produce food in Wales and to care for the Welsh countryside in the future.”

We've been using @what3words for a while and can only recommend it! Knowing exactly where you are could save your l… https://t.co/Z57BLtkRk3
Follow FUW_UAC on Twitter