Set within 400 acres of the Waun Las National Nature Reserve just outside of Carmarthen you can find a mosaic of flower-rich meadows, spectacular woodlands, waterfalls and cascades - and Pantwgan farm.

The organic farm is part of the National Botanic Garden of Wales and is run under the watchful eye of lead farm manager Huw Jones. Looking after the environment, maintaining biodiverse habitats and producing food are of critical importance.

Here Huw looks after traditional breeds of Welsh Black Cattle and Balwen sheep. Not intense in livestock numbers with just 70 head of cattle during the summer and 60 breeding ewes, the farm has been organic for the last 21 years. With limited housing for the sheep and cattle, Huw uses the small herd and flock to its full potential on the 360 acres of permanent grassland.

The farm was established in 1998, when the National Botanic Garden took over the lease of the land. The core missions of the garden from the outset were biodiversity, education and conservation.

Keeping the NNR flourishing is the focal point of the work that is being done here but none of this would happen without the livestock, as they’re being used for targeted grazing.

Another benefit of the NNR and the way it is managed through grazing practices are the varying types of Waxcaps which now call these fields their home. Over 40 different types of grassland fungi have been recorded on one of the fields, 10 of which have the same international conservation status as the snow leopard, polar bear, European bison and Sumatran orangutan.

With all the work that is being done on the farm, sustainability is key. However, Huw feels there is more they can do here to improve their sustainability credentials and is looking forward to making changes to farming practices in the future.

It is however not all about conservation here on the farm. Sustainable food production is just as important to Huw. The farm is in the unique position that visitors have direct access to the grounds and can see the livestock for themselves. This, he believes, is important for people’s perception of the industry and food production.

The future of Pantwgan farm is one Huw is excited about and he sees many opportunities to try new things, look at the science and work out how they can feed an ever growing population in a sustainable way.

“Without those animals grazing - managing the grassland as they do we simply wouldn’t have the diverse landscape that we have.”
Huw Jones
“We have recorded over 40 different types of grassland fungi on one of our fields, 10 of which have the same international conservation status as the snow leopard, polar bear, European bison and Sumatran orangutan.”
Huw Jones
“We’re actually doing some quite interesting DNA research here, looking at the soil life on our meadows versus nature reserves and more intensive grassland elsewhere in Wales. We’re hoping to understand more fully how our less intensive farming benefits the biodiversity below our feet and creates a more resilient farming ecosystem.”
Huw Jones
“Obviously if you are growing trees at some point you are going to cut those trees down which releases a lot of carbon that’s been stored. Whereas if you’ve got this permanent pasture that’s managed by livestock it’s captured there permanently. That is a lot better for the environment longer term.”
Huw Jones
“We change so many people’s perceptions about agriculture, farming and how it works in terms of biodiversity and how the two are linked together.”
Huw Jones
“We get a lot of sceptical people coming here and they spend half an hour or an hour meeting a lamb, meeting a sheep and learning about how those benefit biodiversity. When they go from here, they have a totally different understanding of agriculture and how it fits in with the environment.”
Huw Jones 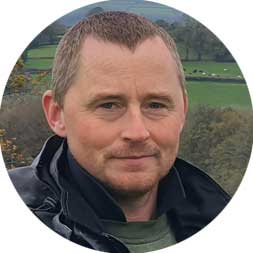